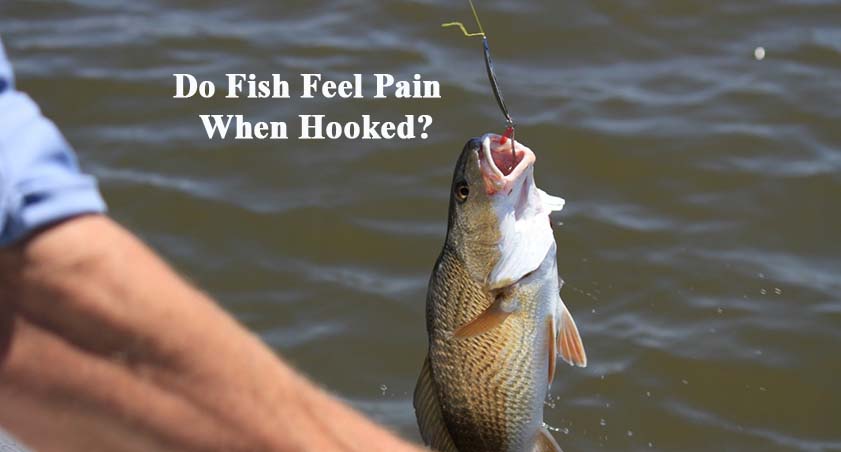 Fishing for sport is one of the leisure activities under stiff opposition from animal rights groups. The bone of contention has always been that fish suffer pain when hooked and no living animal should be made to suffer so much. Assumptions aside!

Do fish really feel any pain under the hook or its just hogwash? What does research tell us?

Before we can jump into the subject of fish and pain, let us first attempt to define what pain is so that we can have a better perception of the topic.

Yes, it may not need defining since every one of us has gone through it one time or another. But it may be different for other species. So how can we tell if an animal or even fish is feeling pain?

However, there are guidelines that researchers employ to determine pain and that are what we are going to use.

The first requirement is that it must be a negative sensory experience caused by something that possibly can result in tissue damage. Can we quickly name a number of stimuli in that category – any ideas?

It must also make the one feeling the pain take protective measures such as the move away from the stimuli. What would happen if you felt no pain and you were standing barefoot on hot coals?

It would undoubtedly lead to some significant tissue damage, even leading to cases of amputation. The experience must also lead to a change in behavior such as loss of appetite – no one talks about how their favorite meal tastes when in pain.

If an experience results in all of the above, then we can confidently state there is a pain. So, do fish feel pain or not? You must have a pretty good idea, but we find out well in the following write up.

But is there research that actually Indicates Fish don’t Feel Pain?

In one research conducted by a team of seven researchers and published in the Journal Fish and Fisheries, it concluded that fish are impervious to pain. In other words, they do not feel pain.

The reaction you see in them is just an unconscious reaction in an attempt to free itself.

According to Professor James Rose, fish lacks the necessary brain power to process pain. They have a minimal number of pain receptors that are insufficient to indicate pain. And so, the guilty conscious among anglers has not basis, in their opinion.

The team made reference to an earlier study involving trout fish, hooked and then released. Professor Robert Arlinghaus, who was part of the research team, noted that the fish continued with their daily activities as if nothing had happened.

This, according to him, was one of the best indications that the trout felt nothing. But is this true? Do the fish feel any pain?

But can we Trust this Research?

In a rejoinder to the research, famous neuroscientists Hanna Damasio and Antonio Damasio conclude that there is no evidence indicating confinement of feelings in humans to cerebral cortex – a part of the brain responsible for processing pain.

Rather, the enteric and peripheral nervous systems, as well as, the other brain structures play an essential role in the development of feelings.

But what do Damasio and her colleague mean by that?

It merely means that the argument highlighting the incapability of fish brain to process pain may not hold water after all. The renowned neuroscientists imply that the fish may not need a highly developed brain to feel pain.

Their brain structure, as it is, is sufficient for the fish to experience pain.

The fish do not have neocortex as humans do, but this can never be sufficient proof indicating fish don’t feel pain. As neurobiologists contend, we shouldn’t only look for answers from the anatomy but also by observing behaviors.

It is not impossible for the brain to function differently across species – it’s what we call adaptation. This means that different beings can experience pain differently and it doesn’t necessarily have to be the same way that we experience it.

So, which Available Evidence Indicates that Fish feels Pain

They may not scream, but you may notice some grimace when you rip the hook off the mouth of the fish. You don’t need much evidence to prove that fish feel pain. The way they behave when exposed to irritating substances pretty much tells a lot, and this is what the research by Braithwaite and others proved.

Basically, Braithwaite wanted to study the fish and determine whether they felt pain like other animals. Therefore, they exposed the fish to various substances that were pretty irritating.

The poor fish behaved in the same way that you would in a similar situation – pretty much. Their gills beat faster, rubbing the affected spots against the tank and lost appetite – this was the best indicator of pain.

Neurobiologists have long known that fish experience pain since they have a nervous system that responds to it. Just like other bigger animals like a dog or horse, fish have neurotransmitters whose primary purpose is to alleviate pain – endorphins.

In other words, endorphins are natural painkillers that animals produce when in pain. And why else would fish produce them?

There is a detailed map by researchers underscoring more than 20 receptors all over the body of a fish including the head and mouth. The spot where the barbed hook goes has these receptors meaning that the fish apparently feel a significant amount of pain as they try to wriggle out of the hook.

Other research indicates that fish can avoid harmful events like electric shock simply because they feel pain when they come into contact with it. And the study by Beukema suggests that the smallmouth bass never returns to their nest after release from hooking.

Of course, countless studies are indicating that fish experience pain. Among the most important and conclusive studies is the one involving rainbow trout. Bee venom is one of the most painful substances. Researchers injected this substance on the lips of the rainbow trout and observed its behavior.

However, the fish lost appetite and started rocking back and forth on the sand. The rainbow trout also rubbed their lips on tank walls, possibly in an attempt to alleviate the pain. Those injected with a non-harmful liquid never behaved in a similar manner.

Trout is a species with a reputation for avoiding new objects. The fish injected with the bee venom paid no attention to the new Lego tower that researchers put in the tank. Which indicates that their focus was elsewhere – of course where else but on the pain?

But those provided with painkillers and those injected with a saline solution were mainly avoiding the new object.

Do Fish then Remember Pain?

In one research, fish exposed to heat showed signs of wariness, as well as, fear indicating that they remember it quite well.

Together with other researchers from Queen’s University Belfast, Rebecca Dunlop and her colleagues found that fish could remember the pain and learn actually to avoid it.

This negates what James Rose and colleagues were saying regarding pain as a reflex response. According to Dunlop, fish experience, remember and learn to avoid pain.

It, therefore, goes without saying that if the fish experience pain, then angling is, of course, a cruel sport. It is in the same category with hunting.

What is the Benefit of this Pain?

In her position paper, Dr. Stephanie Yue wrote that pain is an adaptation developed through the evolutionary process to ensure animals survive and so it is quite impossible for it to disappear.

It is through the pain that animals and fish can take measures and avoid the harmful stimulus or substance causing the pain.

For example, you are more likely to seek first aid or medical attention when some of part of your body starts feeling pain. Without pain, some simple ailments would lead to irreparable tissue damage or even death.

In the case of animals in the wild, pain helps avoid further tissue damage and allow time for recovery. This is why the good doctor Yue referred to it as an evolutionary adaptation to ensure survival – and we can’t agree more, can’t we?

So why would it be any different when it comes to fish?

Well, there is a significant body of research indicating that fish do actually feel pain. They also learn to avoid it just like other animals do – this is what research suggests. So the next time you go angling, don’t consider it as a non-cruel sport. It is no different from taking a gun and running to the forest for buck hunting. But this shouldn’t discourage you from going fishing with your loved ones. Fishing has its benefits.