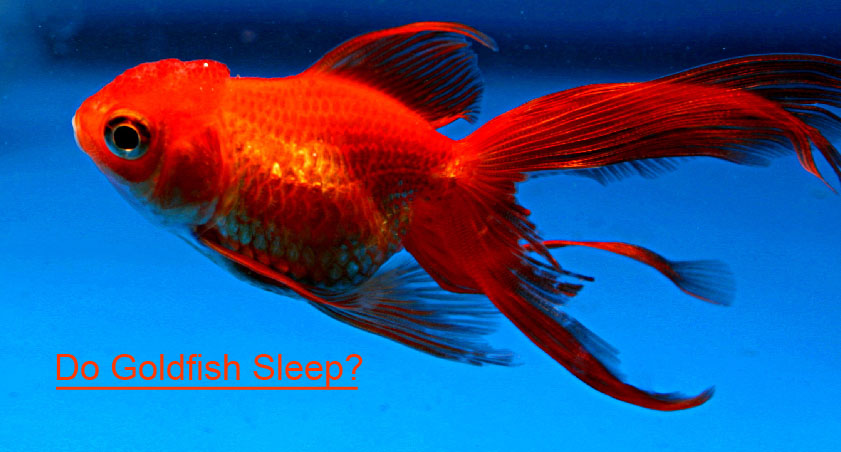 Goldfish are exciting pets that crown a rather dull living room with a burst of new energy. They swim from one corner to the other and around tirelessly, and this gracious motion has a positive effect on our nerves.

Studies show that aquariums help lowers your blood pressure and anxiety. So if you had a not so good a day, then watching the goldfish move around causes your nerves to relax.

Now Question Is, Do Goldfish Sleep?

We are answering this question according to Scientific Explanation. Read on to know in details:

Could Goldfish need some Sleep?

For starters, goldfish are quite intelligent and have excellent eyesight. They quickly tell between their owners and strangers and which is pretty cute – don’t you agree? Goldfish move closer to those that feed them and will grow excited on spotting them.

The cute little fish has problem-solving capabilities. And believe it or not, they have a longer attention span than we humans, yes we humans. As you are probably aware, all intelligent animals need some rest to recoup their energy – and their thoughts, probably.

Goldfish have no eyelids and so does not close its eyes the same way we do. But that does not mean they don't rest. They take naps at particular times of the day and sleep when darkness sets in.

And how do you Know they are Sleeping?

You will often catch goldfish in an unusual position where they sometimes tilt their body downwards and swim around slowly. This is the best indication they are sleeping.

The goldfish will also have low fin activity when they are taking a nap. They will hover about an inch from the bottom and are less active. Some people may think that the fish is down with some illness especially when they notice some color changes.

However, this is quite common when they are sleeping or taking a rest.

But why are their eyelids wide open at all times?

The simple explanation for this is to remain attentive. Goldfish naturally have their eyes wide open so that you would not catch them unaware – they need this for survival. So if you happen to make sudden movements towards them, you will startle the fish and may lead to stress. You don’t want a stressed goldfish, do you?

Switching the aquarium lights at night is another source of stress. Even a brightly lit room at night is not good for the fish as it will disturb their sleep. Dark places are thus ideal for sleeping goldfish, as it is with people.

Therefore, always make sure the lights are off for at least 12 hours and the fishes will be happier and healthier. Goldfish are only active during the day and so the nights are for resting. And so, do goldfish need darkness to sleep? Absolutely!

Do goldfish sleep at the bottom of the tank?

As mentioned earlier, goldfish hover about an inch from the bottom of the tank. They do not ultimately touch the aquarium floor much as we do with our beds. Goldfish may seem to love hiding behind the bottom aquarium rocks, but this is necessary to ensure they are not vulnerable – some do, and it is not entirely a bad thing.

They maintain small movements for stability and to capture some air in the water. Goldfish need to move and flap their fins adequately even when asleep to breath – even your nose and lungs do not go to sleep when your whole body does.

Goldfish will also go to the bottom of the tank when the water is cold. They will sit still and avoid any movement to conserve energy.

And do goldfish sleep upside down?

The fish tilt their head a bit when napping but are not completely upside down. If they are upside down or swimming as if one of their fins are broken, see a vet or research ‘swim bladder disease.' don't assume it is something ordinary.

An upside posture or sticking around plants may be because the water is not that pure. It may be having high levels of nitrates. Ideally, you may need to replace it with pure water – avoid tap water like the plague.

Another common sleep behavior among goldfish is turning pale. This is to ensure they are inconspicuous to predators – something like camouflage. This means that the can, as well survives in the wild – but don’t for one second entertain this thought as releasing them will be a bad idea.

A stressed goldfish may just hang around at the bottom unwilling to do anything. The other primary causes include loud noises, poor nutrition, and insufficient air. These pets are sensitive to their environment both in the aquarium and what happens around the tank.

It can as well be sickness where their water has a lot of nitrates or ammonia. Their scales will often turn pale and dull. They will also not eat anything you bring them – no appetite at all.

Goldfish are interesting creatures and will explore their surroundings with a significant amount of energy. They will quickly get bored if nothing changes for a long time. To spice things up for them, keep changing the toys and bowls but make sure they are bigger than their mouths – they have a particular fondness for testing the edibility of objects.

Turn off the lights

The lights should always be off during the night so that goldfish can enjoy uninterrupted sleep – much like you do. Leaving the lights on makes goldfish sleep for shorter periods. This is not ideal as it will result in a less active pet fish – they will no longer show excitement on seeing you.

Reduced sleep can cause the fish to be less colorful. The fish also need their beauty sleep. Their lifespan will also be shorter if you don’t let them sleep as they should – when healthy, goldfish can live as long as four decades, yes 40 years.

And if you happen to always leave the lights on, the goldfish may develop a habit of always hiding their face in decorations and plants to avoid it when they need to rest – the same way you protect your face from the light when you need to get to sleep.

So now that we know goldfish need to sleep just as we humans, the next question is how many hours a day do goldfish sleep?

How many hours of sleep?

The goldfish are much like people when it comes to sleep needs. They require about 12 hours of uninterrupted sleep to build their immunity and rest for the next day ahead – yes, they have a busy schedule swimming around and making you happy.

And if you are always on the move, a timer will be necessary to automatically switch the lights off when it’s finally night time. This will ensure they are getting the required hours of sleep even when you are miles away.

Is the goldfish sleeping a lot? If so, then there could be a problem. Get a small portion of the tank water and take it for testing. In short, the water could be the problem especially if it has been long since you last changed the water – you also clean your room, don’t you?

We mentioned something about the fish adopting a strange position when resting. However, when you notice they are swimming a lot leaning in one direction, then something is wrong. It is not a new dance or acrobatic move they are trying; it is a disorder.

No, no need to worry. It is not contagious or fatal. It is just a type of bladder disorder.

This is not really a disease but a disorder – notice the difference. So don’t start grieving and making plans on how to give a proper sendoff.

The disorder is sometimes common among the aquarium fish, but it is not a cause for worry. You can remedy it easily within just a few hours depending on the cause. Sometimes feeding them boiled green peas will do the trick.

De-shelled green peas act as laxatives and easily clear any blockage that may be causing the problem. Other causes include parasitic worms, bacterial infection, stress or even physical damage. But this shouldn’t worry you so much as they are treatable.

If it is a bacterial infection, it is imperative you clean the tank within the shortest time possible as al other fishes are at risk.

So do goldfish sleep? There is no time that the goldfish cannot rest – rest is the better word. Their particular favorite is during the night when there is darkness, and everything else is calm. They have no eyelids, and this helps them stay alert. But this does not mean they aren't asleep.

They will float in an unusual manner within the tank. But watch out for the swim bladder disorder that can make them act in the same way. Always maintain a clean aquarium, and the goldfish will be healthier and happier.